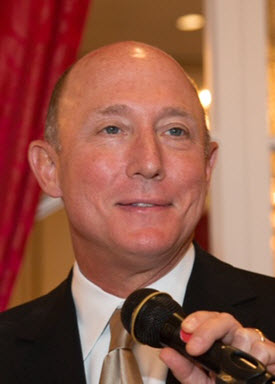 Robert began his service to Team Sledd in 1981 as a sales representative and advanced through the company in positions of sales management and marketing management until 1996 when he became an owner and began to serve as President.

Robert’s industry service includes the boards of the Convenience Distribution Association where he currently serves as Past Chairman, Ohio Wholesale Marketers Association, the West Virginia Wholesalers Association, WV Oil Marketers & Grocers Association, The WV Regional Economic Development Partnership, The Pennsylvania Food Merchants Association, and he is Chairman of the Mid Atlantic Legislative Conference.  Additionally, Robert serves on the Board of Trustees at The Linsly School in Wheeling and is an active member of FACTS – IMPACT a community-based grant award group also in Wheeling, West Virginia.

Robert is a graduate of Linsly Military Institute and Allegheny College.  He lives in Bridgeport, Ohio with Dianne, his wife of 39 years.  In addition to spending cherished time with his four children and eight grandchildren, he enjoys hunting, fishing, and golfing.